Reporting to the European Commission on the implementation of its recommendations regarding rule of law, the Law and Justice government is demanding the end of the procedure implemented under Article 7 of the Treaty on the EU. In the report, the government makes unsubstantiated claims that the changes into judiciary are addressing ‘high public expectations’

In the report on the implementation of the European Commission’s rule of law recommendations, dated 28 January 2019, the Polish government suggests that the EC does not understand the judiciary reforms and is demonstrating ill will by not withdrawing the complaint about the Act on the Supreme Court from the Court of Justice of the European Union.

Furthermore, the Polish government is demanding the end of the procedure implemented under Article 7 of the Treaty on the EU as well as the end of the ‚political’ discussions. It will willingly talk about ‘specifics’ instead.

The Law and Justice government alleges that the procedure ‘no longer contributes to achieving proper understanding of the content of the reform [of the judiciary]’ and proposes withdrawing from the dialogue with the Commission in this procedure and focusing on ‘a detailed discussion on the substance of the reform’.

The document was addressed to the General Affairs Council and copied to the European Commission and the governments of all EU Member States.

The first page of Poland’s report on the implementation of the European Commission’s recommendations on the rule of law: 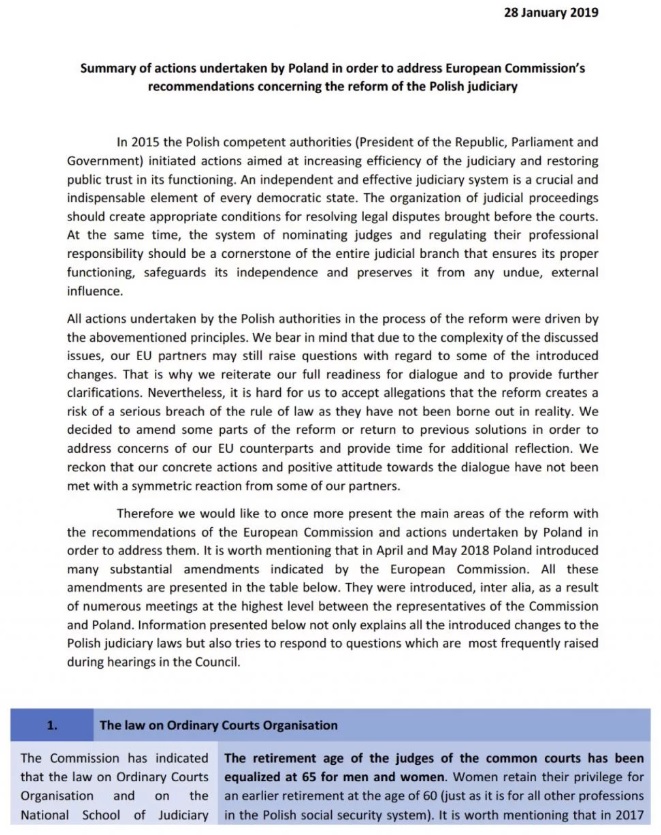 The document starts with the words, ‘In 2015 the Polish competent authorities (President of the Republic, Parliament and Government) initiated actions aimed at increasing efficiency of the judiciary and restoring public trust in its functioning’. It later states, no more no less, that the steps taken by the Law and Justice government within the framework of the reforms of the judiciary were ‘in conformity with the rule of law (with the principle of “democratic state ruled by law)’.

Perhaps the optimistic story about the pursuit of the honourable goals in accordance with European standards, presented in the document, was supposed to have put the Commission to sleep, but it will more likely infuriate it.

Firstly, the report provides another portion of the dubious quality of arguments and outright manipulations, which the EC has already seen in such documents as the “White Paper”, published by the Polish government in the spring of 2018.

Secondly, the Polish government implies that the EC does not understand the intricacies of the complicated issues regarding the legal system in an EU Member State. Even so, the Law and Justice government declares – very generally – its willingness to continue the dialogue and its readiness to provide further clarifications.

Thirdly, it accuses other EU Member States of ill will. ‘We reckon that our concrete actions and positive attitude towards the dialogue have not been met with a symmetric reaction from some of our partners’, complains the Polish government, finding the ‘accusations’ that the changes being introduced in Poland constitute a serious systemic threat to the rule of law ‚difficult to accept’.

Attacks on the independence of judiciary

Despite some concessions concerning the Act on the Supreme Court, the Polish government has been ignoring the vast majority of detailed recommendations on the rule of law presented to Poland by the European Commission in four reports in 2016 and 2017. Frans Timmermans, First Vice-President of the European Commission, specified in detail which steps the EC expects Poland to take at the meeting of the General Council in December 2018. Timmermans’ speech proved that the EC has been watching further alarming developments in Poland.

In particular, it was closely observing the actions of the new National Council of the Judiciary (NCJ), a body that is supposed to protect the impartiality of judges. 3,000 Polish judges wants its dismissal. In September 2018, the European Network of Councils for the Judiciary suspended the membership of the Polish NCJ in its network for failing to ensure „the support of the judiciary in the independent delivery of justice”. The EC is also aware of the harassment of judges and prosecutors who publicly criticized the changes in the courts introduced by the Law and Justice, as well as the disciplinary proceedings being conducted with respect to the outspoken judges by the disciplinary commissioners appointed by Justice Minister / Prosecutor General Mr. Zbigniew Ziobro.

‘The Commission claims that individual parts of the judiciary reform do not necessarily pose a threat to the rule of law, but when they are considered together, they create a so called “cumulative effect” with negative impact on the rule of law. This kind of concept is difficult to defend as it is hardly possible that individual, positive (or even neutral) amendments can be harmful when they are introduced together.’

In the report, the Polish government also makes unsubstantiated claims that the changes into judiciary are addressing ‘high public expectations’ regarding the reorganization of the justice administration in Poland, which ‘have been growing over recent years’.

The Law and Justice government believes that the judges should be consulted on the reforms of the justice administration, although it is ultimately parliament and the Polish president who are ‘responsible for addressing social expectations’. The document does not specify what these expectations are.

Anna Wójcik writes about law and politics and coordinates the works of the Wiktor Osiatyński Archive, a rule of law monitoring center. She can be followed on Twitter at @annawojcik