56 per cent of respondents in Poland would like the European Commission to continue demanding that the Law and Justice party authorities observe the rule of law in Poland, while just 39 per cent would prefer it to “forgive the government”.

A survey conducted for the Polish portal, OKO.press, shows that the pro-European reaction and faith in the intervention of EU institutions is not only not faltering, but is actually gaining in strength. This could be an important sign for Europe.

The results of the IPSOS survey for OKO.press in December can also be considered evidence of the propaganda failure of the Law and Justice party authorities, which are presenting the dispute with the European Commission as groundless intervention, a breach of the autonomy of a national state, and even the private obsession of Frans Timmermans, vice president of the European Commission.

On 19 December 2018, Justice Minister Zbigniew Ziobro reiterated that “the European Commission’s position shows that this is not about the compromise, and the understanding—about which representatives of the EC have repeatedly spoken, they have spoken of such things over the past year—but that it is about politics, about political interests and the continuation of the conflict with Poland. This is, in fact, the objective of Mr. Timmermans’ and the EC’s activities.”

Just 39% of respondents in Poland support this version, while 56% want further intervention from the EC.

Should the European Commission continue demanding that Poland adheres to rule of law? 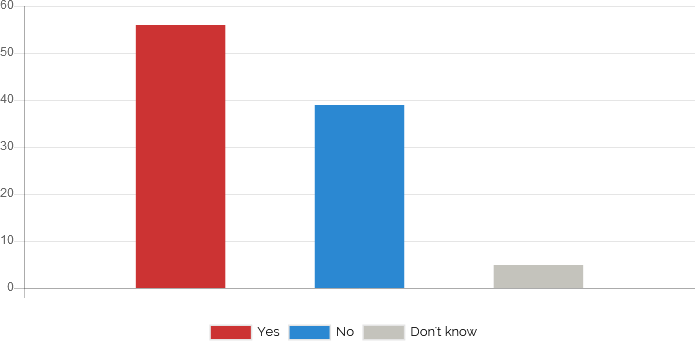 Furthermore, there is evidence that support of the European Commission’s actions concerning rule of law in Poland is increasing.

In the survey for OKO.press conducted in January 2018, 53% of the respondents believed the European Commission should withdraw from interfering with Poland’s internal affairs, even if Poland is not observing the principles of the rule of law, while just 43% were in favour of exerting pressure. These proportions have now reversed.

We asked a similar question in the OKO.press survey in August, namely “Does the Court of Justice of the EU have the right to stop the Law and Justice party’s reform of the judiciary if it acknowledges that it is in breach of European Union principles?” 54% percent responded that it does, while 41% said no. In the same survey, as many as 77% were of the opinion that membership of the EU “reinforces Poland’s sovereignty”. Just 16% of respondents said it “weakens sovereignty”. This was clearly fewer than the 23% who voted against Poland’s accession to the EU in the accession referendum in 2003.

The surveys show that Poles treat Poland’s presence in Europe more seriously than the Eurosceptic Law and Justice government.

The people in Poland see the government is backing down

The approval for the European Commission’s interference may have been strengthened since the Law and Justice government withdrew from some of the changes in the Act on the Supreme Court – under pressure from a temporary injunction of the Court of Justice of the European Union. And, after all, the authorities had promised that, as Law and Justice deputy Stanisław Piotrowicz, former communist-era prosecutor who is now overseeing judicial reform in parliament, said: “we shall not take even one step back.”

Support for the European Commission’s actions increased as Poles saw that the EC, in combination with the CJEU, can exert influence on the Polish government and force it to make partial concessions.

The survey may be construed as an important sign for EU institutions. The decline in the standards of the rule of law is continuing. The European Commission is aware of this – as is demonstrated by its critical position with respect to Poland at the December General Affairs Council. The survey shows that the European Commission has the support of the majority of Polish – namely EU – citizens to continue its work.

The most important factor affecting the assessment of the European Commission’s actions in the dispute over the rule of law is that of party preferences.

Two-thirds of Law and Justice voters and the same proportion of supporters of the “nationalist and anti-European coalition” of the Freedom Party and the National Movement would like the EC to stop interfering. This is understandable. What is surprising is that as many as one fifth of both groups of voters support the Commission’s intervention. This is a sign for the Law and Justice authorities that its Eurosceptical policy is raising doubts, even within its own ranks.

The Civic Coalition voters (95%) and the voters of Robert Biedroń’s just-forming party (also 95%) are undeniably proponents of the European Commission’s actions, as are the few supporters of Ryszard Petru’s Now! party (100%). Significant support is also declared by the Democratic Left Alliance (78%) and Polish Peasants’ Party (73%) voters.

In the OKO.press survey, women proved to be more supportive of the EU than men, although support of EC intervention dominates in both groups.

Support for the EC is also dominant in all age groups, even among the oldest respondents, who usually strongly support the Law and Justice policies. Forty-year-olds, namely those who started to work after Poland’s accession in 2004, are the most pro-European.

As usual, people with the highest qualifications are the most pro-European and most critical of the Law and Justice policies (68% for, 30% against EC interference). However, what is surprising is the huge (2.6-times) advantage of proponents of the EC’s further action over its opponents among the respondents who completed primary and secondary education (59% to 23%). This may be a result of the government’s concessions which this group understood as a sign of weakness of the Law and Justice party. The percentage of proponents of the EC’s actions is lowest among people with high-school education (49%) but, even here, there are more proponents of the EC’s actions than opponents (46%).

Rural inhabitants are traditionally the most Eurosceptical, but, even here, the proponents of the European Commission’s intervention dominate. 60% of urban inhabitants support the EC’s actions, most clearly in medium-sized towns of 20,000 to 100,000 inhabitants (64%).

The text was originally published in Polish at OKO.press. Translated by Roman Wojtasz