Rule of law in Poland

Journalist at OKO.press and Archiwum Osiatyńskiego

Among those surveyed, 58% feel that the CJEU has the right to stop the Law and Justice-led “reform” of the judiciary if the Court of Justice rules it violates EU law. Only 35% disagree. The arguments given by the government, which maintains that the Luxembourg-based Court of Justice does not have the right to take up the issue of Polish courts, are even failing to convince PiS voters. Polish women are pro-EU: they are far more likely than men to take the side of the EU’s highest court.

Editorial note: the survey discussed in this article was conducted prior to the EU Court of Justice’s ruling handed down today (19 November). In the verdict, the CJEU found against the Polish government’s measures.

The Court of Justice of the European Union in Luxembourg on two occasions has already challenged key elements of the “reform” of the judiciary led by Law and Justice (PiS). On Tuesday 19 November it is due to answer the question of whether the Disciplinary Chamber of the Polish Supreme Court is an independent court in the sense of EU law and how this is affected by the new way in which the National Council of the Judiciary has been appointed.

“Luxembourg has no right to judge the reforms”, “Poland is being persecuted”, “similar solutions are in place in Germany and Spain,” politicians from the ruling Law and Justice party argue.

The latest IPSOS survey for OKO.press examines whether the narrative of the authorities, also reproduced by public media subordinated to PiS, is affecting the public’s perception of the competencies of the CJEU.

The results show that the arguments advanced by PiS are not convincing Poles. The majority of respondents, 58%, are of the opinion that the CJEU may stop the “reform” of the judiciary if it finds that the reform is in violation of EU law. Only 35% are of the opposite opinion, while 6% found it hard to say. 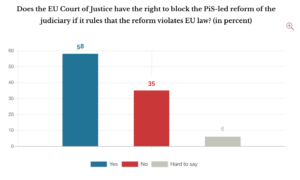 The Law and Justice narrative is weakening. One year ago, in response to the same question 54% agreed that the CJEU had the right to do so, while 41% said it did not.

For PiS = against CJEU

This trend is also visible among Law and Justice voters. Today, 66% of them are against “interference” by the CJEU. At the same time, as many as a quarter of them are convinced that the Court of Justice may stop government reforms if it considers them to be in breach of EU law. 9% of Law and Justice supporters had no opinion.

Views opposed to the CJEU also dominate among voters of the Confederation party, although less so – 54% of them responded negatively to the question. On the other hand, 40% were in favour. A relatively high number among supporters of a party whose most prominent politician, Janusz Korwin-Mikke, has been calling for the “destruction of the European Union” for years and whose activists get excited about burning the EU flag.

Voters of all the other opposition parties are overwhelmingly on the side of the EU Court of Justice. Among voters of the Civic Coalition, 97% of those surveyed were in favor. 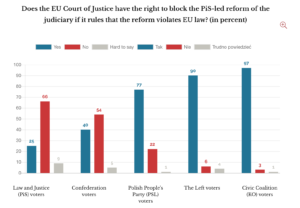 A comparison of the results among Law and Justice supporters with those of all other voters shows that the government’s message is red meat for its own base. It is, however, ineffective in convincing political opponents. 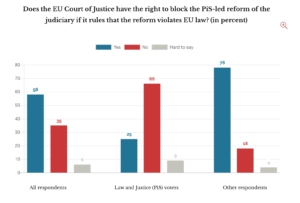 The survey highlighted fundamental differences between the sexes.

Women are almost twice as likely to be in favour of CJEU intervention than against it (61% to 31%). This difference may be due to the fact that women are statistically better educated than men. 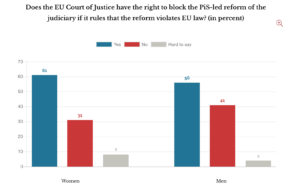 At OKO.press we have written about the increasingly sharp divisions between Polish men and women under 30 years of age. Young Poles and young Polish women choose different political parties and have different opinions on road safety. 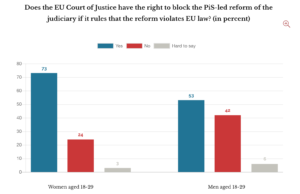 These divisions can also be seen in relation to the competencies of the CJEU and the European Union. As many as 73% of women under 30 support CJEU intervention, while only 23% are against it. Among men of the same age, opinions are more strongly divided – 53% take the Court’s side, while as many as 42% are opposed.

Hope in the CJEU

Awareness of the CJEU’s competencies among the public is crucial, because the Court seems to be the only EU institution capable of stopping breaches of the rule of law by PiS.

On 5 November, a verdict was issued on the European Commission’s complaint against the reform of the common courts. The Court of Justice ruled that the provisions of the 2017 legislation, including differentiating the retirement age of female and male judges, violated the prohibition on discrimination and the principle of effective judicial protection.

In the case of the retirement age of Supreme Court justices, the CJEU delivered its final judgment on 24 June. The Court ruled that shortening the term of office of serving judges – including the First President – by lowering their retirement age was incompatible with EU law.

IPSOS survey for OKO.press 21-23 October 2019, conducted via the CATI method (by phone) on a nationwide representative sample of 1004 respondents.

Journalist at OKO.press and Archiwum Osiatyńskiego

The Commissioner for Human Rights wants the President of the Constitutional Tribunal to be removed from the bench. This is about her husband’s statements

VP of Ordo Iuris will not advise the EU on LGBT. An investigation is in progress

The First President of the Supreme Court is attacking transparency. She will restrict access to information on abuses of power

The Constitutional Tribunal has gone on holiday. In 2019, it handed down the fewest judgements in 20 years

MEP Petri Sarvamaa on the rule of law conditionality: “We gave nothing to Kaczyński and Orbán”

A compelling speech by the Commissioner for Human Rights in defence of the EU. PiS’s attacks “distort the Union’s image”

MEP Šimečka: “There’s no Brussels police which could come and bend the Polish government to its will. And this is good.”

Council of Europe to Ziobro: The “Muzzle Law” Facilitates Corruption