Respect for the rule of law is one of the key conditions for EU membership. No country can join or remain in the EU without an independent judiciary.

This is the English version of an op-ed written by Laurent Pech, professor of law at Middlesex University, originally published in Polish by Gazeta Wyborcza (original version here: “A man with a PhD in law should understand certain things“)

“I will say in the strongest terms, they will not impose on us in foreign languages the system that we are to have in Poland and how Polish affairs are to be conducted”.

This was the reaction of the Polish President to the strong criticism expressed by multiple international organisations, bodies and experts specialising in rule of law matters in respect of the latest bill targeting Poland’s judiciary and judges. 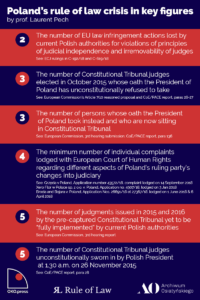 The truth hurts, as is often said, and some inconvenient facts remain.

Poland freely and voluntarily committed itself to upholding the rule of law when it applied to join the EU. The same may be said in relation to Poland’s membership of the Council of Europe. Belonging to a club gives privileges but also entails obligations. This should be easy enough for someone with a PhD in Law to understand. 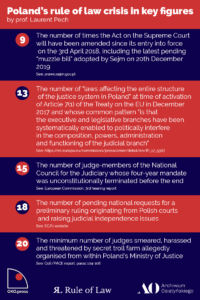 The Polish President also surely knows that the EU is a union based on the rule of law and must have heard of the Treaty provision which imposes a strict obligation on each EU country to provide a system of legal remedies and procedures ensuring effective judicial protection for individuals in the fields covered by EU law. This means among other things maintaining – not undermining – the independence of national courts. 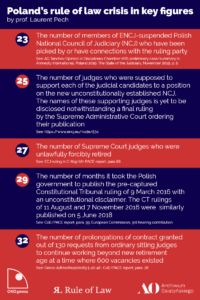 One cannot hide behind the alleged need to reorganise the national judicial system to violate one’s constitutional and international obligations. To borrow from a report of the OSCE Office for Democratic Institutions and Human Rights – available in Polish, it should be added – while no one denies “the right of every state to reform its judicial system, any judicial reform process should not aim to undermine and/or result in jeopardizing the independence of the judiciary.”

The Polish President’s criticism of foreign lawyers is similarly misplaced.

To begin with, once you start going on and on about legal provisions and practices allegedly existing in France or Germany in order to justify your “reforms”, you cannot then complain about experts from France and Germany pointing out your inaccuracies about their legal systems. As recently noted by more than 50 French law professors and legal experts, “The French system is not perfect. No system is. However, deliberately instrumentalising comparative Law and misrepresenting foreign legislations as a strategy to gaslight opponents in a clear effort to subjugate the Judiciary cannot stand uncorrected.” 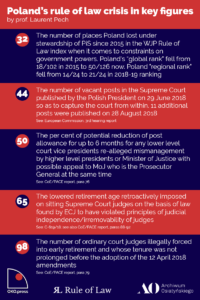 Last but not least, there is no such thing as “foreign interference” in Polish affairs when Polish authorities undermine the independence of their courts and the authority of their judges.

As Polish citizens are automatically European citizens, Polish judges are automatically European judges. Belonging to the EU’s area of freedom, security and justice offers privileges such as the free movement of persons and the mutual recognition of national judgments. Our interconnected European legal system offers great benefits but also implies duties, in particular a duty to abstain from adopting measures which threaten the very functioning of this common legal space. 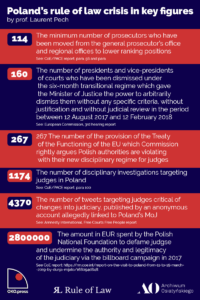 As such, European lawyers, judges and scholars have not merely a right but a duty to speak up and defend our common legal space at a time when it continues to be seriously endangered by the actions of current Polish authorities.

[We thank Professor Pech for supplying us with this version of his op-ed.]

How did PiS cheat the MPs? Gazeta Wyborcza daily reveals the backstage of the purchase of Pegasus

Epic court ruling: Undercover cops cannot be believed because the police are looking after PiS’s interests

Appeal to end the humanitarian crisis on the Polish-Belarusian border

Journalists at the border. The statement of Polish media