They are allowed more. How judges of the Constitutional Tribunal ridicule the rules on being apolitical and the dignity of the office

Journalist at OKO.press. Graduated in law and philosophy from University of Warsaw.

He must know something about this, since he, himself as a stand-in judge, took a place in the Constitutional Tribunal of a judge appointed there by the Sejm.

Mr. Wyrembak calls the people protesting against the Constitutional Tribunal’s verdict on abortion ‘abortion lovers’. He predicted that there would be a new ‘rule of law’, this time ‘exercised with the help of a hammer and sickle’ by ‘warriors wearing European ties’. ‘The spectre is looming,’ Wyrembak concludes dramatically, and in his final sentences, he presents visions of martyrdom of people holding public office – torn away, with their hands tied and their mouths sealed.

Retired Constitutional Tribunal Judge Wojciech Hermeliński commented on Jarosław Wyrembak’s words. ‘The text testifies to Mr. Wyrembak’s exceptional level of emotion. I am deliberately not calling him a judge, because he was elected to a position that was already occupied. Perhaps this is creating a complex appears in this document? However, it’s surprising because, after all, Mr. Wyrembak considers himself to be a judge, while such statements do not befit a judge,’ the judge told ‘Rzeczpospolita’ daily.

In accordance with the regulations that are applicable to the judges of the Constitutional Tribunal (more on these in a moment), disciplinary proceedings should be initiated against Jarosław Wyrembak. So far, the appropriate authorities have not heard anything about such an initiative.

Instead, Wyrembak himself has requested disciplinary action against Hermeliński. In the motion, he accuses him of breaching the principles of ethics. ‘In groundlessly attributing all these rights to himself, Wojciech Hermeliński is using the mass media to publicly formulate unreasonable and very far-reaching statements, instructions and assessments about another judge of the Constitutional Tribunal, including his status and even his personal characteristics’ – justifies Wyrembak’s motion.

There is a secret Code

The Code was never published – either in the official journal or on the Constitutional Tribunal’s website. Therefore, it was unclear for a long time what was actually posted there. Ewa Siedlecka received its content after several months of efforts through the procedure of gaining access to public information, but it has still not been published (e.g. it has not been posted on the Constitutional Tribunal’s website).

It provides, among other things, that:

§ 4.2. A judge of the Tribunal shall observe good practices.

§ 16.3. A judge shall not participate in a public debate on political matters or become involved in the activities of political parties and social movements addressing current politics.

A breach of these paragraphs can result in disciplinary action.

This is not the first time in history that an incumbent Constitutional Tribunal judge, or rather a stand-in judge, has attempted to hold a retired Constitutional Tribunal judge accountable under the secret Code. In 2017, Mariusz Muszyński filed a motion to punish Jerzy Stępień for his statements at a Committee for the Defence of Democracy (KOD) rally.

Muszyński wrote the following about the accused:

In the motion, he also quoted statements from legal theorists, according to which:

A blog about the law, politics, and life

Mariusz Muszyński himself allows himself somewhat less restraint. In the commentaries he publishes in Rzeczpospolita, he wrote about a CJEU judge ‘someone should finally take away this woman’s computer and pen’, or he wrung his hands over the qualifications of Supreme Court judges. He also runs the mariuszmuszynski.pl blog, which he set up in May 2020 and about which he wrote that it is a place ‘where, as a judge of the Constitutional Tribunal, I will be able to express myself about important public matters and also a little about the Constitutional Tribunal … ☺ sometimes seriously and sometimes maliciously ☺ depending on my mood…, but always with a great deal of substantive information.’

There, Muszyński sometimes comments on and criticizes the decisions of the Constitutional Tribunal and international courts, sometimes calls the sons of well-known lawyers ‘drug addicts and cutthroats’ and the Onet site a ‘German information centre’, and advertises subscriptions for ‘DoRzeczy’.

There is even a humour corner:

However, Mariusz Muszynski’s and Jarosław Wyrembak’s literary show are nothing compared to Krystyna Pawłowicz’s activities. The former PiS MP has also spoken out on the matter of ‘breaking off’. She has been posting about Donald Tusk for several days, claiming that he is an assassin and a women boxer, which, even so, is still a mild term. Before she became a Constitutional Tribunal judge, she called him, among other things, ‘a ginger German cloakroom attendant with a false look out of round fish eyes’. Not more than two months ago, she called Left MP, Tomasz Trela, a ‘boor’, a ‘rogue’, a ‘Calvary beggar’, a ‘fifth Russian column’ and a ‘scoundrel’. She also told him to fall ‘to his knees, under the table and take back his words’.

Krystyna Pawłowicz’s posts are virtually indistinguishable from any of the right-wing troll accounts. She regularly mocks opposition MPs by uploading detrimental photographs of them with malicious comments (e.g. Róża Thun, Katarzyna Lubnauer and Rafał Trzaskowski), posts tweet accounts, such as ‘Olga Srokarczuk’, homophobic memes, threatens ‘leftists’ that she will do away with them with the help of a sword, writes (in English) to Boris Johnson that the British government, judges and doctors murdered a Polish diplomat, and unleashed a campaign against a transgender child by publicizing its details.

The judge also has a dire opinion of the European Union, which she believes is planning to destroy Poland under Germany’s baton. Therefore… ‘The ONLY way out, is to gradually TAKE OVER THE EU, to tear it out of the German-Leftist hands, through electoral victories of the conservative parties in the European countries.
There are signs that this could end in success.’ (original spelling in Polish)

One of the conservative parties is particularly close to her heart. Pawłowicz regularly posts MEP Jacek Saryusz-Wolski’s tweets with his political comments. After all, she does not hold back with praise for the PiS politicians. She thanked Piotr Naimski, among others, ‘the silent hero of our security and energy independence’, and ‘Prime Minister JAROSŁAW KACZYŃSKI for the Act and activities strengthening the security of Poland and us Poles’.

After all, he frequently appears on Krystyna Pawłowicz’s Twitter account. And he does this in surprising configurations – as the fear-mongering ‘Kaczafi’…

Kaczafi in a more threatening version… There will be no agreements, we are not taking any prisoners.

… or a Christmas card.

All the best to everyone for the pre-Christmas period

While commenting on Pawłowicz’s activities on Twitter, Jarosław Kaczyński said that ‘there is no rose without thorns’ and he cannot help the fact that the judge ‘has a publicist streak’. A great deal indicates that this streak is also a detective streak, as the former PiS MP sometimes displays knowledge that should not be available to her.

Several days before the so-called envelope elections planned by PiS for 10 May 2020, Jarosław Kaczyński signed an agreement with Jarosław Gowin, according to which the elections organized by PiS in breach of the law would not take place after all. However, a meeting of the party’s political committee was held at ul. Nowogrodzka on Saturday 9 May – Kaczyński wanted to break the agreement and bring about envelope elections on 23 May.

Krystyna Pawłowicz was one of the first people to speak publicly by name on this matter. The Constitutional Tribunal judge demonstrated that she was aware of the internal party gameplay at a time when the envelope election case submitted by the Marshal of the Sejm was suspended on the Court’s docket. 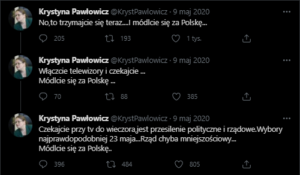 Well, hang on now… and pray for Poland

Turn on your TVs and wait…

Wait in front of your TVs until the evening, there is a political and government crisis. Elections probably on 23 May… Probably a minority government…

The prayers most clearly succeeded, because the elections did not take place either on 10 May or on 23 May, while the government is still fighting with the leftist EU, submitting successive motions to the Constitutional Tribunal to declare one treaty provision or another incompatible with the Polish Constitution.

The article was published in Polish at OKO.press.

Journalist at OKO.press. Graduated in law and philosophy from University of Warsaw.

The Chamber of Extraordinary Verification repeals the resolution of the National Council of the Judiciary, citing EU law

Kaczyński above the law. The delicate work of keeping him away from questioning and out of court